﻿Created in 2005 in honor of Center founder Bill Grace, the Leadership Legacy Award celebrates Puget Sound leaders whose vision, commitment and unceasing efforts are significantly advancing social, environmental, and economic justice. The Center is particularly interested in bringing attention to those who recognize the importance of collective work and who are often out of the traditional spotlight.

Celebrating 25 years of the Center 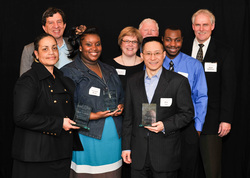